There is a need to take full account of the local authorities in the process of constructing European strategies such as those for the 2020 period. Above all, European policies are being primarily rolled out in local areas, which must no longer be ignored.

These policies are implemented for the EU's citizens, who are much closer to their local authorities than the EU institutions in terms of understanding and therefore applying these policies.

The Lisbon Treaty which recently came into effect has now given local government a central role in the construction of Europe. It has reaffirmed the need to implement the subsidiarity principle in practice.

The February 2010 Eurobarometer on EU public opinion revealed that the EU public considers local level to be the level with the greatest impact on their living conditions. Moreover, two out of three Europeans (66%) believe that local authorities are not sufficiently taken into account in the process of framing policies within the EU.

For all these reasons, it was appropriate for the CoR, which represents the interests of all tiers of local government, to get involved in the consultation procedure on the EU 2020 strategy.

Nonetheless, the CEPLI regrets that the title of this CoR consultation refers to regions and cities only. There is in fact an urgent need to recognise the vital role played by local intermediate authorities within the various tiers of local government.

It is no longer possible to advocate a role for local government within the system of European governance whilst systematically ignoring a whole political level, that of local intermediate authorities.

CEPLI Contribution to the CoR Consultation on Europe 2020

On 12th of October 2015, the European Confederation of Local Intermediate Authorities (CEPLI) organized an Open Days Side Event on the theme "Provinces reinforcing economic development in rural areas".

Mr Paul-Emile Mottard, president of CEPLI and president of the Association of Walloon Provinces (Belgium), opened the debate by underlining the fact that peri-urban and rural areas benefit from clear potential for growth but they are insufficiently valorised in the current context. The measures that provinces, regardless of their name in Europe (Kreise in Germany, Départements in France, Powiat in Poland or Judeţ in Romania) could take, as legitimate authorities of proximity, have the ability and the means to ensure real sustainable development in full compliance with the objectives of European Union Cohesion Policy. He also pointed out the problems related to unemployment, social exclusion, or the limited dissemination of information technologies and communication facing these rural areas.

The speakers tackled the key issues of rural development and possible solutions implemented in their communities, highlighting the role of local intermediate authorities in supporting and developing economic actions in the benefit of rural areas, especially the initiatives on tourism, cultural heritage, access to broadband, mobility and new opportunities for young people living in these communities:

Mrs Ana-Claudia Tapardel, MEP (video message), stressed the importance of solidarity in order to reduce the gap between rural and urban areas and thus preserve the European lifestyle and objectives. Indeed, it is by working together and speaking with one voice that we can implement policies adapted to the challenges faced nowadays by rural areas.

Mr. Robert Meureau, President of the Rural Foundation Wallonia, has meanwhile raised the need of citizens’ participation in the monitoring of rural development policies. The provinces are, in fact, facilitators allowing to different actors to interact and converge their communities’ rural development programs. He also pointed out the importance of waterway tourism that allows the link between rural and urban areas in the Province of Liege (Belgium), for example.

Mr. Alin-Adrian Nica, Chairman of the Romanian delegation to the Committee of the Regions and mayor of a rural community, stressed the importance of multilevel governance and, first of all, cooperation between local, regional and national authorities. He then mentioned two examples of good practice in his rural community: one related to regeneration in his rural community, by transforming some communist farms in an area of production and services, the headquarters of one of the largest furniture factories in the country; the other, related to an European funded project promoted by the province, through which 14 rural authorities will benefit from ICT facilities and broadband, in order to ensure the standardization of the necessary software for documents management, farm registry and local taxes.

Mr. Alessandro Pastacci, member of the Italian delegation to the CoR and president of the Mantova province, reported on the reform of the provinces in Italy, through which some provinces disappear. However, the Italian provinces are increasingly called upon to support local communities; they provide an important networking centre aimed to solve the urgent problems and needs of rural communities, being the closest level of governance to rural authorities. He then gave an example related to the fight of provinces against school dropout, and he also stressed the importance of sustainable mobility and tourism.

Finally, Mr Pierre-Bernard Van Acker, coordinator Hageland-LEADER (Belgium), presented the Hageland programme, in the Flemish Brabant region. The province, having an overall view on local communities, was able to propose projects and played an important role in the regional branding of Hageland, as well as in the involvement of neighbouring towns and the University of Leuven in this program. In fact, Hageland-LEADER programme means a multi sector regional development plan, multi stakeholders approach and large participation of inhabitants.

An interactive debate, moderated by Mr Dan Luca, senior director to Euractiv Media-Brussels, turned into a real exchange of views and experiences between participants.

Several initiatives and concerns were then presented, among which: 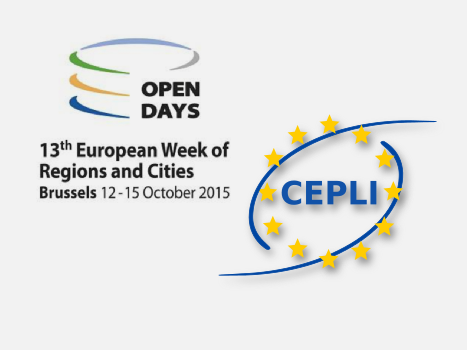 The rural and urban development of our territories is a priority of the European Union Cohesion Policy. The provinces are contributing to it as they provide the link between rural and urban areas.

The aim of this debate is to highlight some actions that provinces can take in order to strengthen growth in rural areas.

The session will address several topics, including examples by which provinces support and strengthen the economic activities in rural areas, such as tourism development, preservation and enhancement of local heritage or accompanying rural development initiatives.

By their action, provinces also fight against territorial and social division by ensuring access to common services and facilities for all.

The debate will be followed by a networking buffet-lunch.

For further information requests, please do not hesitate to contact us.

Mr. Paul-Emile Mottard stressed the commitment of the CEPLI to collaborate in the implementation of the priorities set by the CoR to his sixth term, paying particular attention to the strengthening of the territorial dimension of European policies and projects .

Mr Markkula stressed the importance of ensuring the diversity of levels of authority representative local democracy. He encouraged CEPLI to collaborate in the work of the CIVEX Commission on analyzes territorial impact. He examined with great interest the comparative study on the competencies of local and regional authorities realized by CEPLI, believing that this work could be very useful for the CIVEX Commission.

Markku Markkula gentlemen and Paul-Emile Mottard also discussed issues related to Investment Plan for Europe (Map Juncker) for which it is essential to allow all local stakeholders, large and small, to find their place .

CEPLI has a role to play to make the sensitivity of local intermediate authorities and testify projects at the local level between public authorities and private sector.

President Markkula was very interested in feedback that can give him CEPLI about the realities sometimes different, which exist locally for the implementation of European projects and programs.